Folk singers and composers, William Pint & Felicia Dale have won an ardent following across the United States, Great Britain, Germany, Poland and the Netherlands with their recordings and appearances at festivals and concerts. They have recorded ten albums, the independently released CD  Port of Dreams and Waterbug label releases, Hearts of Gold, Round the Corner, When I See Winter Return, Hartwell Horn , White Horses, Seven Seas, Set of the Sail, Blue Divide and Midnight on the Seas 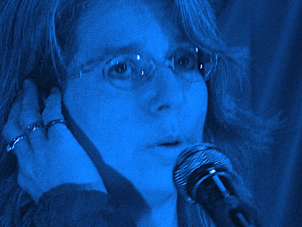 They gather together material from many locales and cultures including the West Indies, Wales and Brittany. No dead tradition, seafaring music is very much alive in the hands of William Pint & Felicia Dale, and in the daily lives of people still dedicated to sailing tall ships in the 21st Century.

Felicia Dale grew up in an environment steeped in the traditional lore of the sea. Born on New Year’s Day 1958 and raised on Vashon Island in Washington State’s Puget Sound, she spent her childhood sailing Northwest coastal waters and cruising Canada’s “inside passage.” Her father was a sea captain who brought back tales and treasures from exotic ports of call. Her mother is a transplanted Parisian; Dale learned French as her first language and acquired a lifelong love for the songs of the French seafaring tradition.

Felicia’s first musical venture was a duet act with Waterbug recording artist Kat Eggleston when they were both sixteen.

Her exposure to the vielle-à-roue or hurdy-gurdy was first through several Seattle area players and then from a performance by the French group Cabistanwhile on tour at Mystic Seaport in Connecticut. Upon her return to Seattle she immediately commissioned an instrument from California luthier Michael Hubbert.

Felicia’s striking vocal harmonies are matched by her creative use of the hurdy-gurdy and Irish pennywhistles, taking these traditional instruments far beyond their usual roles as she blends them into the texture of a song or departs on improvisational romps with equal ease.

William, born December 20th, 1953, was led astray into the folk world in 1970. He was wooed away from his early rock and roll influences (The Who, The Kinks, and The Beatles) by the folk/rock sounds of Steeleye Span and Fairport Convention. This led to a growing interest in the more traditional, less electric music of such artists as Martin Carthy, John Renbourn, The Chieftains and the eclectic songs of the Incredible String Band.

In 1977 he headed west to escape the cold Wisconsin winters of his native Milwaukee and to pursue music. The salt air of Puget Sound and the rich, seafaring history of the Pacific Northwest soon led him to explore the song and lore of the deepwater sailors. With his band Morrigan he recorded an album of Irish tunes and nautical songs By Land or By Sea, for Folkways Records in 1979. Along with composer Paul Ely Smith and Robert Kotta in the group Ellipsis, he investigated the unusual combination of minimalist, folk and classical music. Flying Fish Records released their 1984 eponymous recording produced by the late Irish music genius Mícheál Ó Dhomhnàill. The same trio also performed and recorded as Copperfield, a popular Northwest band specializing in British Isles and Celtic music. The trio opened concerts for Richard Thompson, Martin Carthy, Silly Wizard, John Renbourn, David Bromberg and others.

In performance, William Pint’s emotionally expressive singing is complemented by his powerful guitar and mandola work with which he can supply settings of great delicacy or wild, driving rhythms.

David Wilner is a singer, songwriter, pianist and DJ who has been performing in the Chicago area for over two decades. David’s a cappella career began with the University of Illinois Xtension Chords where he won a Contemporary A Cappella Recording Award for vocal arranging. David went on to sing professionally with the popular Chicago-based vocal rock band Blind Man’s Bluff where he toured nationally for six years and recorded five albums. David competed in the Chicago Harmony Sweepstakes with both Blind Man’s Bluff and Fiveplay, winning First Place, Audience Favorite, and Best Original Song with each group. David twice took Third Place at the National Finals, once winning the award for Best Original Song. Today, David is on stage as often as possible: performing as a solo artist, leading events as a DJ, spreading holiday cheer in The Caroling Party, and releasing his inner “Jersey Boy” in the Frankie Valli and The Four Seasons tribute band The Four C Notes.

A  Performing Artist at the Lyric Opera, Vocal Teacher,  and Columbia College Graduate, Keanon also has toured Italy and performed in Scotland in one of the lead roles in La Boheme, as well as New York’s Carnegie Hall.

Joe is an international touring performer, songwriter, entertainer, and educator. From venues like Carnegie Hall and Lincoln Center in New York, to coffee houses, festivals, spiritual communities, and schools, Joe Jencks has spent the last nine years touring full time. His songs have traveled to every continent via radio, CDs, web casts, and other musicians. http://joejencks.com/index.php?page=bio

Barb has been dazzling the entertainment industry for quite a while.  Her versatile abilities as a professional jazz, opera, gospel singer are utilized on her latest CD gracing the airways, Wayfaring Stranger. Barbara’s smooth voice sails  with her Jazz band, Multiplicty (which has a new CD as well).  Barbara has toured and has three CDs playing on the radio currently.  Additionally, she has worked with the Lyric Opera.

Jenny studied communications in college with an emphasis on radio and TV where she wrote and produced commercials for the radio station. She also studied music and voice and was a private voice coach after graduating.

Jenny attended Second City and IO and has performed comedic and music improv in Chicago. She studied playwriting and scene studies at “Chicago Dramatists”. She has written several comedy sketches and 10 minute plays and is currently writing her first full-length play. She has performed in and directed several plays here in the Chicago area, including “Steel Magnolias” and “Blithe Spirit”. Jenny also leads and directs programs for seniors including, music and movement, art therapy and creative writing.

Claire is the Choir Director at Marian Catholic High School and the Assistant Musical Director at Music Makers of Western Springs. She received her Bachelors in Music from Butler University, where she studied voice and music education. Through Music Makers, Claire has assisted in the directing of many Broadway-acclaimed shows including: The Wiz, Little Shop of Horrors, Hairspray, and Rent. As the Choir Director at Marian Catholic High School in Chicago Heights, she leads four choirs and is looking forward to traveling with them to NYC this year to sing at Carnegie Hall.

Dan Marcotte records, and performs Renaissance, Medieval and Irish folk music.  He is the music director of the Bristol Renaissance Faire where he has performed as Dan the Bard for the last twenty years.  He is a founding member of the Irish band, The Whiskey Brothers.  He performs at schools, libraries, festivals and conventions both locally and internationally.  Dan also composes, records, and performs Dungeons and Dragons themed music, as well as songs about general nerd culture (star wars, video games, anime, steampunk, etc…).  I have performed at GENCON, GaryCon, ACEN, C2E2, WindyCon, DucKon (Guest of honor 2014), 3Con, CODCON, OPCON, and this fall, GameholeCon.  He has 8 CDs, including his “Gamer Triology”: Manticores and Owlbears (2009), BardCamp! (2011) and Epic Lute (2014).  All of his music is on itunes, spotify, and cdbaby.  www.danthebard.com, www.thewhiskeybrothers.org,www.judithanddan.com

Peter Bromann – Vocalist, Pianist, Music Director, Accompanist  Peter’s diverse musical background started at a young age. From voice to his superb skills as a pianist/accompanist  has led to him audition tours for Disney’s The Lion King.  He plays and teaches regularly for various theaters. As a Music Director, Peter has worked in many schools and churches

Presenting: Your Song as a Monologue

Suzanne Bracken is a firm believer in Peter Pan’s ideal of never growing up. Starting out in children’s theater, studying music and dance at the age of ten, Suzanne found her passion for performance early in life. Now cleverly disguised as a responsible adult, Suzanne still performs on stage, in film and occasionally at renaissance festivals. She is currently performing with New American Folk Theater as part of the Chicago Musical Theater Festival in their production of My Life Is A Country Song, playing the role of Shirley. Previously, she worked with NAFT in their production of Dark of the Moon, Playing Mrs. Summey.

Suzanne is Managing Director of Ludicrous Theatre-Chicago and has been seen in their productions of Hippolytus, Radio TBS, Sleeping With Straight Men, Rocky Horror, Conquest of the Universe, Sordid Lives, Southern Baptist Sissies and Vampire Lesbians of Sodom. Also a collective member emeritus of LiveWire Chicago Theatre, she has performed in their productions of Hedda Gabler, Uncle Vanya, Much Ado About Nothing and Life is a Dream. Film credits include independent films Vanessa Rising, The Directed By, Ball Busters, The Truth About Average Guys, Fluffenhaus: The Comeback of a Pop Culture Icon, Actually Adieu My Love and Happy Man’s Pants. Suzanne also does voice-over work and has recorded her first album Sugar, Spice and Everything Nice with the renaissance musical comedy group she co-founded, SistersStrange.