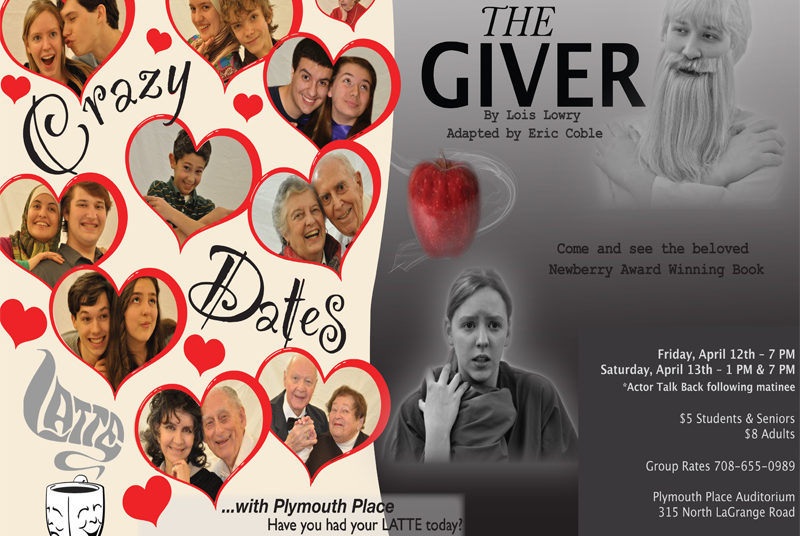 THE GIVER AND CRAZY DATES
Ask the ethical question – which is more important, free will or comfort? Meet Jonas, a normal eleven-year-old boy and his family living in a futuristic society. Everything is pleasant. Society has managed to eliminated all the discomforts of living – pain, starvation, fear, war, and hatred – and choice.
There are no choices to worry about at all: not concerning who you marry, what 2 children you are assigned to raise, even how you respond to an emotion. Your career is chosen for you at age 12. All life choices are mapped out for you. Anything that is confusing is eliminated to decrease stress.
See into this world where gray is the only color – join the sameness. There are no surprises – only sameness in every aspect of life. Everyone sees in literal shades of gray. Everyone is abidingly polite. Everyone has the comfort of having their paths completely chosen for them.  But what is the cost?
The Giver, based off Lois Lowry’s novel , was performed in the Spring 2013 show (April 12th and 13th) in conjunction with Crazy Dates.
Crazy Dates consists of humorous works from Carol Burnett and original works.
Written by the Troupes:
So Much In Common (Felicia Pfluger), Paranoia (Felicia Pfluger), The Friend Zone (Felicia Pfluger),  It’s a Major Date (Felicia Pfluger), That’s Amore (Felicia Pfluger), Opposites Attract (Felicia Pfluger), Body Bubble (Felicia Pfluger), and Cute Card (Felicia Pfluger).       Dinner Date (Bella Perez), The Pick Up Line (Dick Best), Brief Encounter (Gracia Battestoni) ,
Originally Performed by Carol Burnett:
Nothing in Common, Blind Date, and The Rat Race.