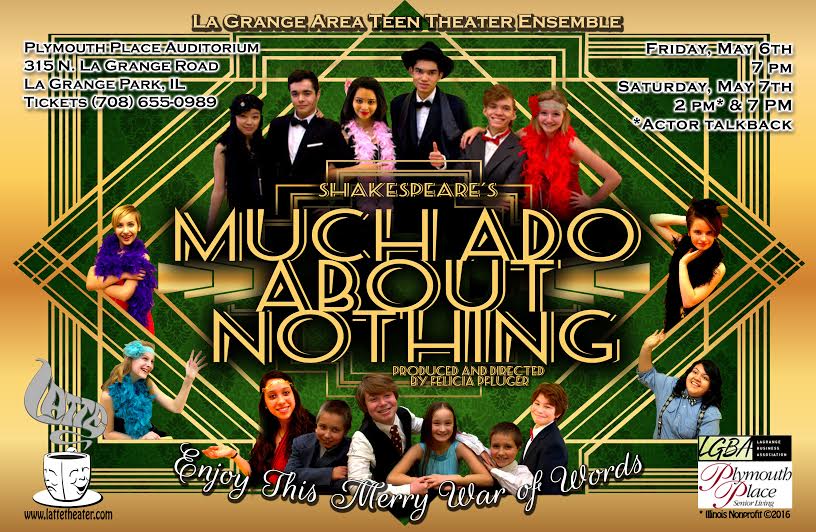 oin us on a Roaring Twenties tour de force of LATTE’s spring, full length play. We are thrilled to present Shakespeare’s Much Ado About Nothing!

Though it is technically considered a comedy, many a Shakespeare enthusiast are perplexed, for Much Ado is also an emotional thriller, a love story, the examination of evil, and a tragedy with a happy ending as well – and truly defies categorization. The light and hope of human nature cannot be seen without the dark as its counterpoint. In this way, Shakespeare highlights comedy with the starkness of sorrow and tragedy, bringing the profound truth of relations with humanities love and laughter.

The plot? After a successful battle campaign against the rebellious Don John; Princess Donna Pedro, accompanied by the satiric Benedick and earnest Claudio visit Leonada, the Governor of Messina. While there, Claudio falls in love with Hero, the Governor’s innocent daughter and yearns to marry her. Benedick engages in a merry war of words and wits with impish Beatrice, Hero’s cousin.

Awaiting the wedding, everyone attempts to trick Benedick and Beatrice into falling in love… even Ursula, the Lady in Waiting. Don John and his henchmen Borachia and Conrad plot and succeed to tear Claudio and Hero apart. The wedding is ruined – as the Friar creates a plan to save all from despair – hoping to restore Hero’s reputation – believing that good will win out. Against the odds, the villains’ plan is somehow caught by the comedic, incompetent Constable Dogberry, Deputy Verges, and more capable watchmen and Sexton. Throw in a masquerade ball, mistaken identities, fights, love lost and found – in the end, it is Much Ado About Nothing!

Cached Query Vendors?filterByFormula=OR({Name} = "Much Ado About Nothing") needs refreshing in 299