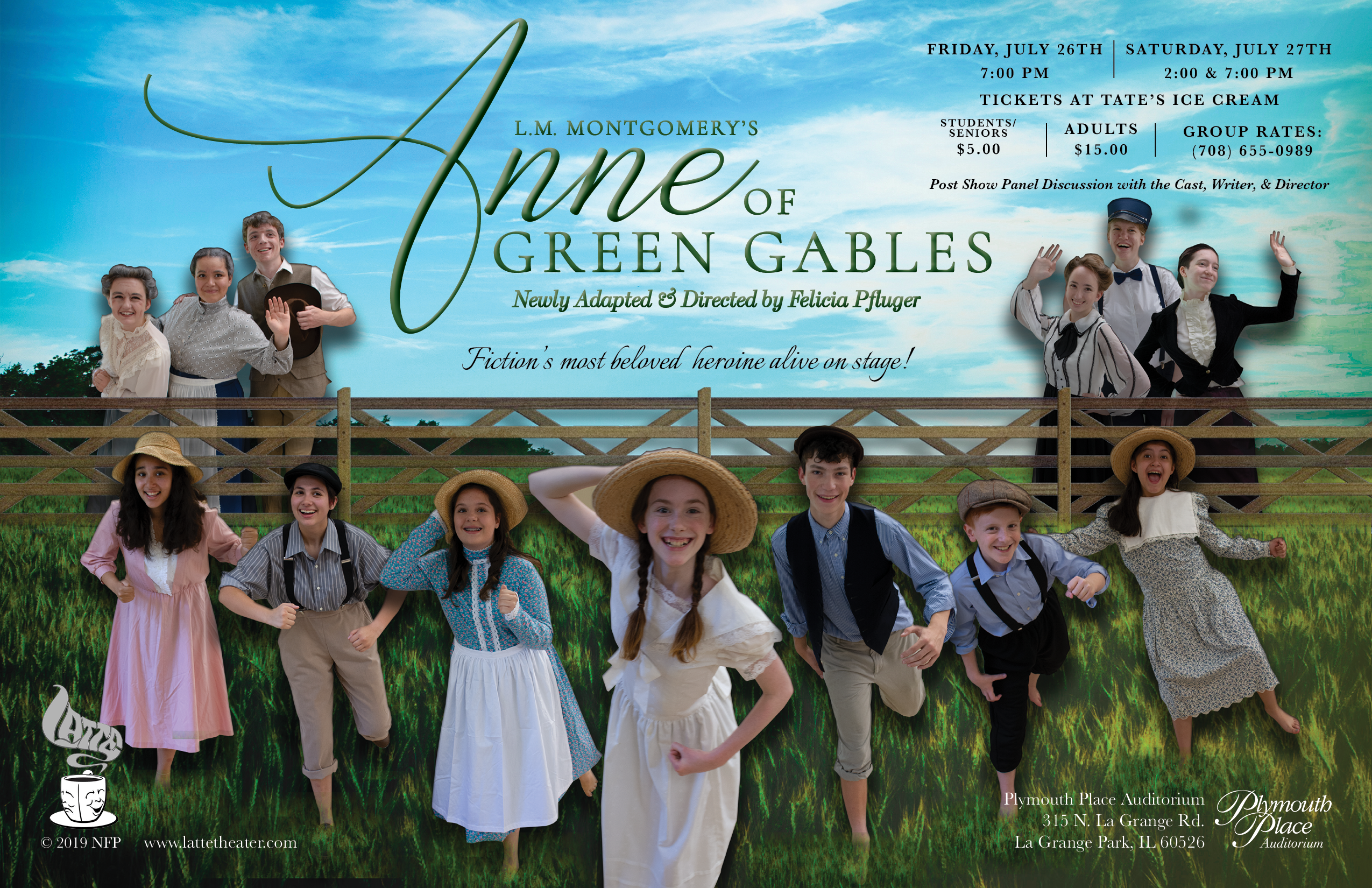 ANNE OF GREEN GABLES
Fun, resilient, brimming with life, ANNE OF GREEN GABLES chronicles an orphan’s journey. Plucky and precocious, ANNE (with an “E”) finds an unlikely home in Avonlea. Through her mishaps and adventures, fiercely determined and fiery-tempered Anne charms all, young and old alike, as she takes Avonlea by storm. Newly adapted for stage for a new generation by Chicago Playwright, Felicia Pfluger. See your favorite characters spring to life in L.M Montgomery’s beloved classic. Family-friendly. See how one person can make a difference.

ANNE OF GREEN GABLES, is at its core, is a story of rejuvenation and resiliency, seen through the hopeful, wistful, and imaginative eyes of a Nova Scotian orphan who finds an unlikely family in an elderly brother and sister, who originally just wanted a boy to work the farm…and found a surprise in “Anne with an E” waiting at the train station.

The story is timeless. Everyone can relate with Anne. The beloved classic, written by L.M. Montgomery, has sold over 50 million copies and been translated into 20 different languages. The cast of LATTE implored me to create a new stage adaptation, and, it is obvious they have me wound around their little finger! And I absolutely loved adapting it for the stage. Anne has a special place in my heart, as I was a foster child myself, precocious beyond my years.

Wherever Anne goes, fun adventures and chaos seem to follow. She has been forced to grow up, in order to survive in the orphanage, as well as the harsh living placements she had to endure. But Anne has a special kind of resiliency that her imagination has blessed her with. And that grants her childlike innocence to see a life filled with miracles. She is a paradox of wisdom and naivety, wrapped up in the fiery will of a red-haired, free spirit.

Once Anne is able to put down roots, she is able to adjust the lens of her perception and recovers her youth as she is allowed to heal. It’s a vibrant coming of age story that allows us all to look around with new eyes and appreciate the miracles that surround us.

The ripples caused by Anne’s vision and imagination are mesmerizing. And the beauty of the show is how each-and-every one of the other characters are just as engaging and interesting as Anne. Matthew, Marilla, Rachel, Miss Stacy, Gilbert, Moody, Diana, Ruby, and the gang mutually grow and learn from Anne… as she learns from them. And to quote Anne, “It’s been my experience that you can nearly always enjoy things if you make up your mind firmly that you will.”

I was struck at the authentic portrayal of each of the characters and how the actors that portrayed them. Everyone organically embodied the character.  It felt that they were made for them. Being a fan of the original story, I could have been a stickler, but I loved that natural essence of every character. Miss Stacy celebrating the talent of each student inspired me – it is essential to have environments like this and celebrate uniqueness.  I was so glad I came.
Cheryl Finley
This show should be performed for all school groups. Great exploration and teaching on the reasons behind bullying… and it’s a funny comedy!
Cathy Marks
The characters ring out. This show flies by. My squirmy four-year-old loved every minute. Great values without being preachy. You root for each character.
Sally Stanis
Excellent acting all around. Anne’s exuberance empowers you and comedy rolls off the stage, yet they are no minor characters. You feel like you are at home with your favorite friends and family.
Stan Smithe
Matthew’s soft heart and humor warm yours. And you can’t help but root for Marilla and Anne’s relationship. And don’t get me started on how funny  Marilla and Rachel were.  Two old-bitties and best friends – but believable and not one dimensional.
Mart Nelson
Excellent! This Anne of Green Gables is a beautiful insight into compassion.  I loved the professionalism of the actors.
Judy Suraci
I love Pfluger’s updated version of this “feel good” comedy. “The fishing hole” scene was especially hilarious. Every character grows in believable ways. It’s a good thing I came early to grab my seat!
Angie Manning